Education
Widely regarded as one of Africa’s preeminent writers and scholars, Niyi Osundare is a Nigerian poet, playwright, essayist, human/environmental rights activist, and distinguished Professor of English. He was born in Ikere-Ekiti in 1947. He received his primary education at St. Luke’s School, Ikere, where he was best student in his class and lead actor in the school drama in his graduating year; secondary education at Amoye Grammar School also in Ikere where he edited the school magazine and graduated in 1966 with what was hailed as one of the best results in the West African School Certificate Examination (WASCE); his higher secondary school education at Christ’s School, Ado Ekiti where he excelled in academics, drama, and campus journalism. At Christ’s School, he served as editor-in-chief to the team that revived Agidimo, the school newsletter. He went on to edit The Green Champion, official magazine of Dallimore House, and collaborated with his former teacher, Christopher Ward, in the writing of Not In Name Only. He earned his university education from three continents: BA Honours in English from the University of Ibadan, Nigeria; M.A. in Modern English from the University of Leeds, UK; PhD in English from York University, Toronto, Canada.

Teaching Career
Niyi Osundare’s teaching career spans several decades. He started his university teaching career at his alma mater, the University of Ibadan, in 1974, rising to the rank of Professor in 1989, and was Head of the English Department from 1993 to 1997. He was a Fulbright Scholar-in-Residence at the University of Wisconsin-Madison, 1990-1991, and Visiting Professor and Poet-in-residence at Franklin Pierce University, Rindge, New Hampshire, September 2005 to January 2006. At the University of New Orleans where he currently teaches, he was appointed Research Professor, Endowed Africana Professor, and, ultimately, Distinguished Professor of English, 2012 to date.
As a teacher for over 40 years, he is keenly aware of the importance of education in human development and passionately involved with the strategies for elevating the quality and character of education as a tool for national and international understanding and cooperation, and prime investment in the future. Many of the products of his creative writing workshops in Nigeria and elsewhere have become productive writers and teachers in their own right.

Literary Career
To date, Osundare has authored 18 books of poetry, two books of Selected Poems, four plays, two books of essays, and numerous scholarly monographs, articles, and reviews on literature and culture. Some of his works include Songs of the Marketplace, 1983, Village Voices, 1984, Waiting Laughters, 1990, Days, 2007 and City Without People: the Katrina Poems, 2011. His poems have appeared in over 70 journals and magazines in different parts of the world while many of them have been translated into many languages across the globe. A believer in the intimate relationship between poetry and music, and the philosophy of poetry-as-performance, he has carried out readings and performances of his poetry on all the continents of the world.
To him poetry and music are Siamese twins joined in every vital part of their bodies; most times he sees his lines with his ears. His rhythm responds to the deep-timbred cadence of the drum.

Prizes and Awards
Niyi Osundare has won numerous prizes and awards over the years. Among his many prizes are the Association of Nigerian Authors Poetry Prize, the Cadbury/ANA Poetry Prize (which he won on two occasions), the Commonwealth Poetry Prize, the Noma Award (Africa's most prestigious Book Award), the Tchicaya U Tam’si Award for African Poetry (generally regarded as “Africa’s highest poetry prize”), and the Fonlon/Nichols Award for "excellence in literary creativity combined with significant contributions to Human Rights in Africa". In 2004, his award-winning book, The Eye of the Earth, was selected as One of Nigeria’s Best 25 Books in the Past 25 Years by Spectrum Books; and in 2012 one of his poems was selected as Nigeria’s contribution to the cultural events which complemented the London Olympics. He has been recipient of honorary doctorates from l'Universite de Toulouse-Le Mirail in France and Franklin Pierce University, Rindge, USA. On December 4, 2014, Osundare recieved Nigerian National Order of Merit; awarded in recognition of his “service to humanity in the field of humanities”. He “has successfully carved his name in gold in the hearts of people of this nation (Nigeria) and many nations of the world”.

Public Discourse
Undoubtedly one of Nigeria’s eminent Public Intellectuals and consistent social critics, Niyi Osundare has, through his numerous articles, interviews, press statements, and suchlike media interventions, contributed immensely to the elevation of public discourse in Nigeria, and helped to raise the level of national awareness. He is reputed for his blunt, forthright, but fair, well-reasoned, and patriotic views and perspectives on national and international issues as they relate to Social Justice, Human Rights,  Democracy, and the Environment. For about 25 years, 1986-2013, he was a columnist for Newswatch, Nigeria’s premier newsmagazine. (A selection from his columns for this magazine has now been published under the title Dialogue with My Country, while plans are afoot to publish a selection of his interventions in Nigerian newspapers from 1979 to date).And in an effort to popularize written poetry as a medium of social mobilization and enlightenment, he started, in 1985, the longest-running individual weekly poetry column in Nigeria, in The Sunday Tribune. A scholarly account of his experience in this form of verse journalism, entitled ‘Bard of the Tabloid Platform: A Personal Experience of Newspaper Poetry in Nigeria’was the invited banquet speech at the 1987 Canadian Association of African Studies, and has since been published in Mapping Intersections: African Literature and Africa’s Development(an African Literature Association (ALA) publication edited by Anne Adams and Janis Mayes).

Social and Artistic Activism
A vehement champion of the right to free speech and strong believer in the transformative power of words, Osundare anchors his credo on two of his favourite sayings: “To utter is to alter” and “The Word is an egg” (the latter, a translation of a Yoruba adage, is the title of one of his poetry books). He is renowned for his commitment to art that is socially relevant art and aesthetically accomplished. According to him:
“The very calling of the artist/writer is a political statement; with writers from historically disadvantaged parts of the world, political consciousness becomes a social, almost existential imperative. Moral apathy is a luxury we can ill afford. Silence is oftentimes an evasion of moral responsibility, an advertent or inadvertent collusion with those whose noise enslaves the world. We areas implicated and committed by every word we utter, every word we write; as we are by every word we fail to utter, every word we refuse to write - by the very way we intrude upon the universe of being. Facile, absolutist aestheticism is no defence, for beauty devoid ofa deep social-moral bearing is incomplete, very much the same way moral burden without aesthetic integrity is nothing but a millstone around the neck of the work. For me, form is a faithful companion of function.According to Yoruba aesthetic philosophy to which I am gratefully indebted, Ewa ti ko wulo ewa yepere (Beauty that is not useful is idle beauty), a kind of beauty that is something close to a waste, even a betrayal of the artistic vision. I consider myself in the league of writers who can never be indifferent to the world; for I believe that if as a writer you refuse to take interest in the human condition, you should not be surprised if, in the end, only corpses and skeletons are left to read your works. Hence my overriding watchword: Humanity First . . .”On another occasion, his focus falls specifically on the African condition:
"You cannot keep quiet about the situation in the kind of countries we find ourselves in, in Africa. When you wake up and there is no running water, when you have a massive power outage for days and nights, no food on the table, no hospital for the sick, no peace of mind; when the image of the ruler you see everywhere is that of a dictator with a gun in his hand; and, on the international level, when you live in a world in which your continent is consigned to the margin, a world in which the colour of your skin is a constant disadvantage, everywhere you go – then there is no other way than to write about this, in an attempt to change the situation for the better.
Osundare’s practice of the poetry of social and political relevance came to the fore in Nigeria’s long years of military dictatorship and repression, during which period the poet engaged in the poetry of mobilization and resistance through modulated metaphors and ingenious parables. This method, in his own words, was his “antidote against silence” particularly under the brutal  rule of the dictator General Sani Abacha (1993–1998), when vocal opposition became  a mortal risk and the “indirect song” gained currency as ballads of resistance. It was during this repressive era that he wrote ‘Not My Business’, which has now turned out to be one of his most studied poems. Osundare’s regular weekly poetry columns became the “Sunday tonic” for many Nigerians, and responses flowed from readers who confessed they found their voices in his songs (a selection from these poems from 1985 to 1990 now form part of the collection Songs of the Season). These songs criticised the regime and commented upon the lives of people in Nigeria. As a result he was frequently visited by Security Agents and asked to explain his poems and to whom they referred:
"By that time I realized that the Nigerian security apparatus had become quite 'sophisticated', quite 'literate' indeed!"
"A couple of my students at the University of Ibadan had become informers; a few even came to my classes wired. And when I was reading abroad, someone trailed me from city to city. At home, my letters were frequently intercepted
Since Nigeria’s return to civil democracy in 1999, Osundare has shown in his writings that the old monsters of social injustice and corruption have only changed their style and not their substance.In 2004, his weekly poetry column in the Sunday Tribune was re-invigorated and re-named Lifelines, and since December 2006, the new title has run under a sub-title, Random Blues, which employs the rhymed six-line format of the blues genre in its exploration of various experiences from the private to the public, the personal to the political.(The first collection from these blues was published in book form in 2011, and plans are afoot for the publication of subsequent volumes). In this forum aswell as his other media outlets, Osundare continues his attack on corruption, electoral malpractice, impunity, social inequity, environmental degradation, and suchlike evils without forgetting to mention the potential beauty of life and the possibility of hope. (For his open letters to public functionaries, see Letters to President Obasanjo and Yar’Adua; letters to Nigeria’s Ministers of Education; for the State-of-the-Nation Lecture on Corruption, see ‘Why We No Longer Blush: Corruption as Grand Commander of the Federal Republic of Nigeria and so on.

CRITICAL RESPONSES TO AND INSTITUTIONAL RECOGNITION OF NIYI OSUNDARE’S WORKS

Osundare’s works have been the subject of critical and pedagogical  studies in different parts of the world, especially in his country, Nigeria, where they are on the reading list from elementary  to university level. His poem, “Not My Business”, is on the high school syllabus in the U.K., while at the University of Uyo, Nigeria, he has been  featured in the Special Author course for senior undergraduates. His works are also subjects of numerous B.A. and M.A. research projects and Ph.D. dissertations. Book length studies and monographs based on them so far include:

The Poetics and Poetry of Niyi Osundare, (published proceedings of a conference on Osundare’s works), Abia State University, Nigeria, 2004

IbiwariIkiriko: Baffling Baptism of Nature: Niyi Osundare’s The Eye of the Earth, 1999 (83 pages)

Wole Olanipekun The Role of Literature in the Cultural and Socio-Political Development of Nigeria: Niyi Osundare as a Case Study, Lagos, Nigeria: Franjane Ventures, 2007 (52-page monograph). 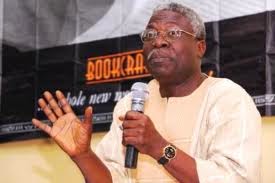